Avalanche transceivers can transmit and receive signals (hence the name, transceiver). They use one or more antennas for this purpose.

The real benefit of multiple antennas occurs during searching as explained below.

Two-antenna transceivers have two antennas mounted perpendicularly. They compare the strength of the signal that is received on each antenna to calculate the location of the buried beacon. This allows the transceiver to guide you to the victim by displaying a directional indicator.

Two-antenna beacons retain a strong signal even when they are turned 90°, because the second antenna is then aligned with the transmitting beacon's flux lines. (The Ortovox 3+, Ortovox Zoom+ and the Pieps DSPs especially good at receiving a signal when the antennas are turned 90°.) Two-antenna transceivers, as with single-antenna transceivers, are unable to resolve spikes. This means that they may incorrectly locate the closest position during the fine search.

Three-antennas transceivers have the advantages of two-antenna beacons (i.e., they can display a directional indicator). They also have a tiny, vertically-mounted third antenna which only turns on when you get near the victim. The third antenna greatly reduces, or eliminates, spikes (where the beacon mistakenly points to a location a meter or two from the victim).

Released in 1997, the Tracker DTS was the first transceiver with two antennas. It quickly gained the reputation as the easiest avalanche beacon—it certainly was. The DTS used its two antennas to display lights that directed you toward your buried friend. Many professionals discounted the Tracker as being a beacon for novices, but ease-of-use is important when someone is dying.

The Pieps DSP was the first transceiver to add a third antenna. Today almost all digital transceivers have three antennas (an exception being the DTS which is still being sold). These avalanche transceivers not only offer the directional and distance benefits of two-antenna beacons, but they eliminate problems with spikes. A "spike" is when the strongest signal is up to two meters away from the transmitting beacon. You won't notice whether a transceiver can handle spikes when searching for a beacon a few inches under the snow (as is typical during practice), but bury the transmitter under a meter or two of snow and the difference between a two-antenna and a three-antenna beacon is significant. The three antennas ensure that there are antennas pointed in three-dimensions (i.e., forward/back, left/right, and up/down). The beacon can then use the relative strength of the signal on each antenna to precisely locate the transmitting beacon. The Ortovox Patroller, Ortovox D3 and (most) Ortovox X1s also have three antennas, but in my testing they did not accurately resolve spikes. The Pieps DSPs (and probably others) has a 4th antenna that is only used during its self test.

In my testing, having two-or-more antennas is the most important factor in performing a rapid coarse search in a variety of conditions with a variety of rescuers. And three-antennas greatly improve the fine search in all but very shallow burials. I know some old-timers will disagree, but only until they do serious tests with multi-antenna transceivers. I was a hardcore Ortovox F1 fan and swore that multiple antenna transceivers were for dummies—until I used one and discovered the benefits. That isn't a sales pitch, rather it is based on my experiences with many beacons.

There's a rumor that if two transceivers are very close (with one of them transmitting), the second transceiver's antenna will be damaged. I've had numerous conversations with electronic gurus and they tell me this is an urban myth. They respond, in part, "If the low power from a transceiver could damage a nearby antenna, it would damage its own antennas." Similarly, I've been told that leaving a transmitting transceiver on a steel table will cause the antenna to detune. I'm no expert on this topic, but the gurus tell me this is totally bogus.

However, avalanche transceiver antennas are relatively fragile and dropping your transceiver can damage its antenna. It is important to periodically test your transceiver's transmission and reception range to make sure it's working correctly. 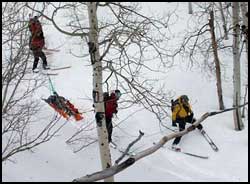