Shopping? This is a good high-end package. 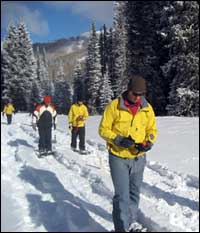 Avoid the tunnel-vision trap of believing that transceiver range is the only important criteria—it isn't. Range is certainly important, but the difference might not be significant if you fumble with the controls, if the display is confusing, if the fine search positions you over a spike, or if you can't identify and locate multiple burials. Using an appropriate search strip width is far more important that having a transceiver with a long range. As explained on the discussion on performing a signal search using a transceiver, it is much better to spend a few extra minutes searching a narrower search strip during the signal search than to end up at the bottom of the avalanche and have to repeat the entire search.

Remember that slowly swinging your beacon from side-to-side during the signal search will increase the likelihood that your antenna will line up with the transmitting beacon. 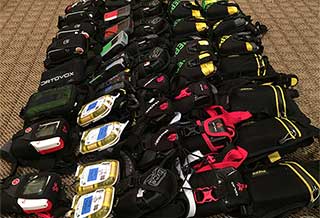 Surprisingly, a transceiver's reception range can easily vary by more than 5 meters from one day to the next (even when using the same transmitting beacon). That's probably due to very subtle differences in background noise. It's a good reason to be skeptical of results from a single test session. The ranges on this page were distilled from 493 range measurements collected from 144 different transceivers during 17 different test sessions ( view the testing details).

Although I have tested many transceivers, some transceivers were only tested a handful of times (e.g., the ARVA Axio and the Ortovox Zoom were tested fewer than five times) whereas I tested other transceivers numerous times (e.g., I've tested the Tracker2 a whopping 22 times Pieps Sport 12 times). Even with this large sample of transceivers, differences of 5 meters or less are probably immaterial.

NOTES: The range of the Pieps Micro is almost identical to the Pieps DSP Pro. The Micro appears to be better in the above chart because it was tested during only one test session when all transceivers had a longer range. Transceivers that can search in both analog and digital mode are shown above with a "(D)" for digital. The analog ranges are displayed, below.

The following chart shows the distance at which popular avalanche transceivers received a signal when the antennas were perpendicular. By comparing the ranges with the above chart, you can see that some transceivers, like the Pieps Sport and DSP Pro, actually had a longer range when perpendicular.

This next chart averages the inline and perpendicular reception ranges. This may be the most telling of the preceding charts. There are transceivers that received a signal at more than 40 meters and those where the average range was less than 30 meters. Said more clearly, use narrower search strips with the Tracker transceivers.

A handful of avalanche transceivers can be toggled between analog and digital searching. When in analog mode, the transceivers emit a beep without a direction or distance indicator. We recorded the distance when the sound was "faint but undeniable." This required a very quiet background—you would never hear the faint signal over the sound of moving skis (or even while walking on snow). This makes it unfair to compare the analog distances (which required total silence) to the digital distances (where the ambient noise was immaterial). That said, the long analog ranges are helpful if you want to confirm that there is a transmitting beacon (e.g., before exposing rescuers to potentially hazardous avalanche conditions).

It is interesting to see that the analog distances of the ARVA transceivers were less than their digital ranges. It's unexplainable.

The following chart shows reception ranges when the antennas were positioned inline. This chart includes many discontinued transceivers. Two distances are displayed for transceivers that support both analog and digital modes.

NOTES: As explained in the test details, the analog distances are when an extremely faint (but undeniable) audio signal was heard. You will not get these analog ranges if there is any background noise. Likewise, the digital ranges are with the best-case antenna alignment and the transceivers were given a long time (up to 10 seconds) to lock onto the signal.

( Learn how to test your avalanche transceiver.)