This page explains the criteria that were used to test avalanche transceivers for BeaconReviews.com.

Throughout all of my testing, I strive to keep the tests as scientifically accurate and unbiased as possible and to avoid subjectivity. I don't have an incentive to do otherwise.

Over the past 14 years, I have measured the reception range of avalanche transceivers 421 times in 15 different sessions. These tests involved 167 different transceivers. All of these included measuring the range with the receiving transceiver's body held inline with the transmitting beacon's antenna. In 172 of those tests, I also measured the reception range when the receiving transceiver's body was perpendicular to the transmitter's antenna (for a total of 593 measurements).

I have strived to keep the tests as objective as possible by replacing all batteries at the start of the testing, testing the ranges of previously tested transceivers to adjust for daily variations (e.g., due to the transmitter, background noise, atmospheric conditions, etc), testing a large sampling of transceivers during each session (typically 15+ transceivers, but sometimes 40+), including multiple people in the testing (a minimum of three, but typically five+), having a dedicated scribe, using written protocols that are read to all of the testers before the testing began (e.g., cell phones off, how to determine when a transceiver has received signal, etc), retesting any results that were unusual, keeping track of which transceiver was transmitting, recording the ambient air temperature, etc, etc. 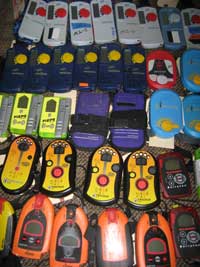 Learn how to test your avalanche transceiver.

To test if a transceiver can ignore spikes, the transmitting beacon was placed two and three meters above the ground on a non-metallic pole (this is easier than digging a three-meter hole). Tape measures were run from the base of the pole in opposite directions on the ground. I do not use BCA Tracker (because the antennas are not inline with its housing) or Ortovox 3+, S1+, or Zoom+ (because they use orientation-based transmitting) as the transmitting beacon. The receiving beacon is then moved very slowly along the ground, in a straight line, to search for the strongest signal(s).

The spike testing was performed on numerous sessions, using different transmitting beacons, at different "depths." Almost all three-antenna transceivers get within an inch or two of the pole—the exceptions being the Ortovox X1, Ortovox Patroller, and Ortovox D3.

My typical multiple burial test involved placing two transceivers approximately five meters apart. The searching transceiver was then changed to search mode (sometimes within the receiver's range where it would immediately pick up a single and sometimes from a distance where no signal was received). This process was repeated using two transmitting beacons of the same brand (without signal overlap), using two transmitting beacons with different cadences (periodic signal overlap), and using two beacons using the DSP's Smart Transmitter (different brands, without signal overlap).

Most of my multiple burial testing has been limited to two transmitters, although in the fall of 2010 I did numerous tests of the Ortovox 3+ with three transmitters.

(Read about multiple burials and transceiver marking on AvyRescue.com.)

In almost every case, the dimensions listed in the comparison table are the actual sizes as measured with calipers. Small protrusions that are less than ~5% (such as the triangular Search switch on this ARVA Link) were not included.

The volume of the transceivers was calculated by multiplying the length, width, and depth. The volumes ignore a transceiver's nooks-and-crannies.