In addition to being skilled at avalanche rescue, how about not being buried in the first place?

The only assured approach for that goal is, quite obviously, to not get caught in an avalanche. Failing that, the selection of airbag backpacks in North America has increased rapidly in recent years, accompanied with a slight decrease in both price and weight for some models.

In contrast to your likely first impressions, airbag packs work not through enhanced buoyancy but instead through the principle of inverse segregation: whether in a box of cereal, a can of mixed nuts, or a moving mass of avalanche debris with entrained objects, bigger objects are more likely to stay higher in the mix. A deployed airbag simply makes you bigger, which helps keep you on the surface. And unlike an automotive airbag, even the airbag packs that are designed to wrap around the wearer still leave most of your body exposed to trauma.

So do they really work? Yes. How well? A 2014 peer-reviewed study by an international team of researchers analyzed databases from several nations, including the U.S., Canada, and many European alpine countries. The analysis was restricted to incidents in which both airbag pack wearers and non-wearers were seriously involved. The researchers developed a sophisticated model to control for various factors in order to isolate the effect of airbag packs. Perhaps the most salient single statistic is that out of every 100 skiers who have died in avalanches, 36 would have lived had they been equipped with airbag packs. ( Read a more accessible version of the peer-reviewed study as published by The Avalanche Review.)

Why weren't more lives saved? First, as previously noted, airbags can do little to mitigate the human body's traumatic exposure to the multiple impacts from trees and rocks in an avalanche path runout: somewhere around one-fourth to one-third of all avalanche victims die from trauma, not asphyxiation. Second, some airbag users do manage to stay on top of one debris flow only to be simultaneously buried by another debris flow—this often occurs in larger avalanches. Third, airbag packs were successfully deployed in only about 80% of the incidents in the study's database. In more than half of the failed deployments the victim never managed to pull the trigger.

Saving more than one out of every three avalanche fatalities is still an impressive safety record. Offset against the increased survival rate though is the cost and, for self-propelled skiers, the weight penalty of about three to five pounds.

Four different types of systems are available—with widely varying costs and inconveniences for both resetting the system and for air travel.

If commercial air travel within or from the United States is an important concern, ignore the citations by the International Air Transport Association whose so-called regulations are merely suggestions from an industry council with no direct implications for the actual rules followed by the Transportation Security Administration.

If you are particular about pack features, don't take anything for granted. Some common backpack features, such as a ski carrying system and hydration bladder, are not found on all airbag packs, because some portion of the pack must split apart for airbag deployment. Also, specified weights may not include a charged cylinder and specified capacities may not exclude the space occupied by the airbag system. In sum, do not assume anything unless you verify it on the particular pack model and model year that you are considering. It's also important to check out the trigger system in person: you don't want to be the one out of every ten airbags users who were unable to pull the trigger!

This is a backpack-like device that contains a non-inflated, internally supported ball (like a "Chinese lantern"). When an avalanche strikes, you pull a rip-cord to deploy the ball which is tethered to the end of a 12-meter cord. The ball remains above the snow—or so you hope. Rescuers follow the cord to the victim. It sounds like a lot of shoveling... The avalanche ball is essentially an update to the original avalanche cords from days of old. Neither the original nor this more modern reincarnation have any documented saves. Don't confuse this with an avalanche air bag, above, which prevents you from being buried in the first place.

(Random photo from an avalanche mission)
Please Support our Advertisers 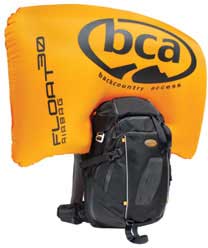