The Pulse was discontinued after the 2016/17 ski season and was replaced by the Barryvox S.

Overview: The Barryvox S is based on the Pulse technology, so the transceivers are similar in many ways. They are both three-antenna transceivers that are loaded with features for professional users, although the features can be appreciated by anyone.

Display: Both transceivers have raster-based (i.e., bitmapped) screens that can display detailed information and animation ( unlike the vast majority of avalanche transceivers). However, the Barryvox S's display is much larger (~40%) and significantly brighter than the Pulse's. And the text on the display is much bigger. For example, the " distance numbers" on the Barryvox S are almost twice as tall as on the Pulse (11 mm vs 6 mm), and impressive improvement.

As with the Pulse, the Barryvox S displays menus from which you can select commands. However, rather than the left/right buttons on the Pulse (and the clunky-looking text at the bottom of the Pulse's display), the Barryvox S has intuitive up/down buttons on the right side of the transceiver. You use the up/down buttons to select from a column of icons along the right side of the display and then press the Flag button to select an item.

Some of the Barryvox S's menu commands still aren't very intuitive. For example, you can turn "Pro Check" on or off, but it isn't clear what that means unless you read the user's manual. That said, the menus are a huge improvement.

If the Barryvox S senses that the distance is increasing (i.e., that you are moving away from the buried transmitter), it displays a U-Turn arrow. The Pulse would point behind you. I am not a big a fan of transceivers telling me to turn around, because they often give false alarms. (FWIW, the Barryvox version 3.0 firmware is supposed to reduce the number of U-Turn false alarms.)

On the Pulse, if you had it configured properly, you could enter analog mode by simultaneously pressing both buttons, and then crank up the sensitivity (by pressing the right button repeatedly) until the display turned off. In that mode (which was not intuitive to find) the Pulse had a ridiculously impressive search range (albeit audio only). The Barryvox S has a similar feature (with the Pro Search mode turned on, switch to Search, press the up arrow a few times until "Range+" is highlighted, and press the Flag button).

Signal Overlap: When the Pulse receives overlapping signals from multiple transmitters, it displays a (somewhat annoying) "Stand Still" message until the signals separate. The point being, if the signals are overlapping, no transceiver knows which direction to point (some transceivers simply stop displaying information when this happens). Taking a different approach, the Barryvox S estimates the distance and direction based on the last signal it received and uses that information until the signal overlap resolves (it also blinks the distance numbers to let you know it is estimated the direction). According to a Mammut engineer, standing still until the signals stop overlapping or walking slowly until they stop overlapping are both good strategies.

Pro Settings and Profiles: The Pulse had "Basic" and "Advanced" user profiles. The Barryvox has a Pro Settings menu which allows you to enable additional features, including Pro Search and Pro Check. The terms are a little jargony (e.g., it isn't clear what these settings control without reading the user's manual). The Barryvox S's "pro settings" are similar, but not identical, to the "advanced" features on the Pulse.

Analog Mode: On the Pulse, you could enter analog mode (providing the unit was configured for the Advanced user profile) by pressing and holding both buttons. When searching using the Barryvox S (providing the Pro Search option is enabled), you can press the up arrow (to highlight the magnifying glass) and then press the up arrow again (unintuitively, to highlight "Alternative"), and then press the Flag button to enter the alternative search mode. When the alternative search mode is enabled, the audio changes to analog and the direction and distance indicators display information on the strongest signal. The volume is adjusted automatically unless you press the up or down button which switches to manual control of the volume.

Fine Search Graphics: The Barryvox S can display either " landing strip" or "cross fire" graphics during the fine search. In Barryvox S's evolving jargon, the "landing strip" is now called the "standard visual guidance" and the "cross fire" graphics are now called the "classic visual guidance." As stated in my review of the Barryvox S, I have a preference for the classic view, because unlike the classic view, Mammut's standard mode does not redisplay the direction indicator (i.e., the arrow) until you move a considerable distance (up to eight meters) from the transmitter.

Spike Handling: In my testing, the Barryvox S did not resolve spikes as well as the Pulse. There was a "sour spot" (about one meter above and to the side of a transmitting beacon) where the displayed distance would increase as I moved closer to the transmitter. The engineers tell me the Barryvox S and Pulse use similar logic and this shouldn't be the case, but I replicated this repeatedly (and sent a video to Mammut). I only tested one Barryvox S, so it is possible this behavior was specific to the unit I was testing. In any case, this isn't a deal-breaker, but it was disappointing.

Audio Options: Both transceivers let you select between analog and digital audio tones during different portions of the search. On the Barryvox S, this is done by turning on the device, selecting Settings, selecting Pro Settings, selecting Audio Guidance, and selecting Analog. When Audio Guidance is set to Digital, the Barryvox S will perform " acoustic search guidance" by emitting three short beeps as long as the directional arrow is pointing straight ahead. Unlike the Pulse, this feature can't be turned off, but there isn't a downside to using the acoustic search guidance (and many professional rescuers will opt for the analog setting).

Group Check: Both transceivers offer a group check on startup. As with the Pulse, I don't find the prompt intuitive on the Barryvox S (i.e., the words "Group check" are displayed at the bottom of the screen for a few seconds, but there isn't any indication that you should press the Flag button to enter the group check mode). Due to the smart signal tracking of these transceivers, you really should use the group check mode to check your partners' transceivers, rather than simply toggling into Search mode. If you don't, the searching Barryvox may "lock" on to the first signal it receives and continue to receive that signal as you move away from the first transceiver and toward the second transceiver. 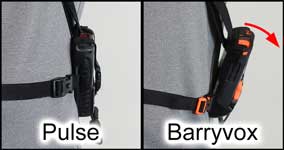 Harness: Both transceivers use a plastic "bracket" style harness. However, the (horizontal) waist-strap on the Barryvox S is mounted lower on the bracket which, in my experience (and as shown in the adjacent photo), causes the Barryvox to tip away from the wearer's body. This made me much more aware that I was wearing a transceiver. This might sound trivial, but most of our interaction with an avalanche transceiver is simply wearing it, and I do not find the Barryvoxes to be as comfortable as the Pulse.

Compass Calibration: After replacing the batteries in the Pulse, you were prompted to "calibrate" the compass by rotating the device. This step is no longer performed using the Barryvox S.