Shopping? This is a good high-end package.

Summary: The Axio is ARVA's high-end avalanche transceiver that replaces the completely different high-end ARVA ProW. Its third antenna has a unique fold-out design that allows it to be much longer the third antennas in other transceivers. The Axio supports the marking of multiple burials and can be toggled between digital and analog modes (read about multiple burials and transceiver marking on AvyRescue.com). The advanced features in the Axio make its user interface less intuitive than its sibling, the ARVA Neo.

Searching: The Axio has a suggested search strip width of 60 meters. In our testing the Axio's reception range was basically identical to the Pieps Micro, Sport, and DSP Pro (i.e., approximately 45 meters). 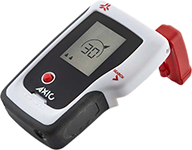 Searching is activated by folding out the Axio's red "third antenna." This design allows the third antenna (which must be vertical) to be much longer than in other transceivers. AVRA's marketing materials say that all three antennas are always active (whereas the third antenna in other transceivers is normally active only when the searching transceiver is within a few meters of the transmitter). ARVA refers to this as "spherical searching." The concept is interesting, but it wasn't apparent to us that the Axio was any better at finding a transmitting beacon.

During searching, you can toggle between analog and digital searching. After briefly pressing the power button, the word "Analog" appears on the screen along with a blinking "flag" icon. We found it confusing that you then needed to press the joystick to enter analog mode. To us, the display of the word "analog" implied that it was already in analog mode and the blinking flag implied that we could flag a transmitting beacon.

The primary advantage of transceivers that have both digital and analog modes is the analog mode (usually) provides a much longer reception range. Unfortunately, in our testing the Axio's analog range was significantly shorter than its digital mode (we tested two devices on two occasions).

If you are walking away from a transmitting beacon (which can happen with any transceiver due to the way flux lines propagate), the Axio displays "U-Turn" and an arrow indicating that you should turn around.

If the Axio detects interference while searching, it will display "Band 25" and reduce the search range to 25 meters. You should then reduce the search strip width by 50%. You can manually activate this restricted search mode by briefly pressing the power button, selecting "Config," and choosing "BAND SR" (who'd know?).  As with much of the Axio, this might be helpful but it was undeniable non-intuitive.

Spikes: During my simple spike test, the Axio did not resolve spikes/nulls consistently. It did consistently display the shortest distance when the transceiver was directly above the transmitting beacon (a good thing), but it occasionally displayed shorter distances when the transceiver was approximately two feet to the side (not a good thing). This is surprising considering the Axio's long third antenna—resolving spikes is the purpose of the third antenna. The Axio's spike handling is much better than two-antenna transceivers, but in my limited-yet-repeated-testing, it wasn't flawless.

Multiple Burials: The Axio shows up to five silhouettes on the display to indicate the number of transmitters. A plus sign appears when there are more than five transmitters.

When you are within 3 or 5 meters of a transmitter (based on a custom setting), a flag icon blinks in the upper right-hand corner of the display to let you know that you can flag (aka "mark") that transmitter. Pressing and releasing the joystick will ignore the closest beacon and direct you to the next transmitter. A flag will then appear next to one of the silhouettes. If you attempt to flag a transmitter when you are too far away, the word "no" is displayed on the screen. To unmark the previously ignored transmitter(s), toggle the Axio to Send and back to Search.

Revert to Transmit: The Axio can be configured to automatically switch from search mode to transmit mode if 2, 4, or 8 minutes pass without significant motion. This feature can also be disabled. The Axio emits four beeps before reverting during which time you can press the joystick to continue searching. The Pieps Micro/Sport/Pro's approach of continually beeping after reverting is preferable .

Group Check: During startup, the Axio displays its firmware version. The battery percentage and "OK" are then displayed several times. The screen then prompts, "GROUP CHECK?" for several seconds. Flipping out the third antenna activates the group check mode. (Hopefully you're smarter than me—I kept trying to respond to this prompt using the joystick.)

When in group check mode, the Axio displays "ER" if the transmitting transceiver is closer than 0.5 meters (although the user manual says 1 meter). I think most people will justifiably assume this means there is an error with the transmitting beacon when in reality it simply means the transceivers are too close. (The Mammut Element and Mammut Pulse actually display the words, "Too Close".)

Controls: Whereas the ARVA Neo's user interface is as simple as it gets , the same cannot be said of the Axio. Granted, the Axio has additional features that require additional user input (e.g., analog versus digital), but the Axio's less-than-intuitive interface is a constant presence. For example, anytime you press the Axio's power button, the "Config" menu option is displayed. Moving the joystick up or down changes between Config and Standby. If you press the joystick when Config is displayed, you will be prompted with "FINAL," "GCHECK," "BACKSEND," "STANDBY," "BAnd SR," "SCROLL," and "RESET". Some of these may be intuitive (e.g., "reset"), but others will be a mystery unless you read the manual and have a good memory (e.g., "backsend"). And the fixed-LCD screen results in a quirky font that makes it difficult to read (e.g., the "T" appears as a backwards "7").

One of the more serious problems with the Axio's user interface is if you enter the menus (i.e., tap the power button and then press the joystick) and then fold out the third antenna to begin searching, the transceiver won't enter search mode. You have to either press the power button twice to exit the menus (go figure) or wait more than a minute until the menus time-out and the search mode is activated.

It seems simple, but our testers repeatedly had difficulty turning the Axio off (press and hold the power button until "Off" is displayed, and then press the joystick once). As with other user interface concerns, this was non-intuitive but easy enough to learn.

Extending the bright-red third antenna to enter search mode is relatively intuitive and very easy to learn. However, the Axio doesn't provide any audio feedback when you enter or exit search mode so it is possible to bump the extended antenna and inadvertently return to transmit mode.

The Axio's user interface isn't a deal-breaker and if you practice using it frequently you will become familiar with its interface, the interface isn't nearly as intuitive as the Element, Neo, Pieps Sport, etc.

Comfort: The Axio fits in a neoprene pouch harness. It requires effort to insert it into, and remove it from, the snug pouch, although that might get easier with use (or it might become even more difficult when the neoprene is cold). The pouch is secured with a small Fastex closure than can be released with good-fitting gloves, but it is likely you will need to remove bulkier gloves or mittens to release the closure.

The harness has a clear window that may encourage people to position the Axio with its display facing outward. Most manufactures recommend that avalanche transceivers are worn with the display toward your body to limit damage to the display during an avalanche.

The Axio is significantly smaller than the ARVA Neo and about the same size as the Pieps Sport and Pieps DSP Pro , although the shape of the Pieps makes them a little more pocket friendly. The Axio is a little heavier than other transceivers.

User Manual: The Axio's user manual is dramatically better than the earlier ARVA manuals, but it does contains several obvious typos (e.g., "witching to search mode").

Updates: In theory, the ARVA Axio can be update by the manufacture. However, I am unsure that the device that is required to update the transceivers ever made it to the USA.

Customizing: The Axio offers configuration options that let you select how close you need to be before you can mark a transceiver during a multiple burial search, whether you want to be prompted to perform a group check on startup, how many minutes must elapse before the transceiver reverts from searching to transmitting, whether you want to activate the "bandwidth reduction" mode when interference is detected, whether you can manually scroll through a list when there are multiple transmitters (which ARVA says should only be used by experts), and an option to reset the device.

The configuration settings are activated by briefly pressing the power button and then using the joystick. Personally, I think a single-press of the power button makes these rarely used configuration settings too prominent. I would prefer requiring the user to hold down the joystick on start-up or to use external software (such as the Pieps Micro smartphone app) to change the settings.