Want to learn more? This is a great book.

The RECCO® Rescue System is a two-part system. Manufactures attach a small Band-Aid-sized reflector (sometimes called a "chip") into clothing, boots, helmets, Ortovox avalanche transceivers, etc. The reflector is a passive device and does not require batteries or any user attention. A special detector, which is used by professional rescuers, transmits a signal that is reflected back to the detector. The system is analogous to submarine sonar—the detector sends a signal that bounces off the chip and is received by the detector. The RECCO detector has a range of up to 120 meters through the air, 20 meters through dry snow, 10 meters in wet snow, and 8 inches in water.

The RECCO system can sometimes detect other electronic devices, such as a cell phone or two-way radio, at very short distances. I have occasionally picked up a signal from electronic devices when training with a RECCO detector, but I have not been able to locate a victim's electronics during an actual search. And in hindsight, I should have tried with much shorter search strip widths (e.g., two meters).

Rescuers who might be involved in a RECCO search, for example, ski patrollers and search and rescue members, should know if they have a reflector (e.g., sewn into their clothing or built into an Ortovox transceiver) so it doesn't confuse a fellow rescuer who is using a RECCO detector. 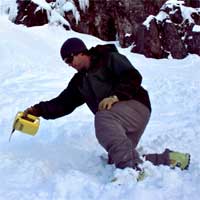